Making jerky with my Nesco Snackmaster Pro is something I really enjoy. But the other reason I bought a dehydrator is to dry fresh herbs from my garden. Fresh herbs don’t last long, so I dry as many as I can and keep them in air-right containers in the pantry like this dried cilantro.

Easy as anything to dry, dried cilantro crumbles up and stores easily for use in the winter. It’s not a substitute for fresh cilantro in recipes like salsa, but it’s great for flavoring stews and soups.
I did not remove the cilantro from the stems until after I dried it. It’s a lot easier to remove the leaves once they are dried. I then lightly crumbled them just a bit and put them in containers for use later.

I love drying fresh herbs with my Nesco Snackmaster Pro, such as basil. I also freeze them for later use. 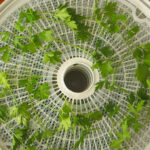 Easy as anything to dry, dried cilantro crumbles up and stores easily for use in the winter. It’s great for flavoring stews and soups.
Course Side
Cuisine American
Cook Time 12 hours
Total Time 12 hours
Servings 2 cups
Calories 104kcal
Author Mike