This right here is what potato salad is supposed to be. I’ll never make another potato salad again because there just isn’t any point. Leatha’s Bar-B-Que Inn red potato salad is it. I’ve never been there, but Leatha’s sounds exactly like the kind of BBQ joint that I would love. From the atmosphere to the food to the service, it receives nothing but high praise. I’m sure Hattiesburg, Mississippi, considers themselves lucky to have it!

Don’t go messing with Leatha’s Bar-B-Que Inn red potato salad. Don’t add bacon. Or onion. Or smoked paprika. None of that. I mess with a lot of recipe, but I won’t mess with this one. I’d probably get hit by lightning. 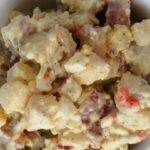