Since getting my Char-Broil Big Easy I have been going back and remaking some of my favorite dishes that I usually make on my smoker. The Big Easy cooks at a much higher temperature than you would normally run a smoker so you have to adjust the cooking times, of course, but the rest is pretty straightforward and worry-free.

These crazy-good mini habanero meatloaves cooked on the Char-Broil Big Easy cook in almost no time at all, which is a good thing because you’ll want to get to eating them as soon as possible. There’s no waiting 2-3 hours for them to cook on a smoker for these little beauties. Tender, juicy meat that packs a punch. They are not your grandma’s meatloaves. Well, I guess they could be if your grandma likes the heat of habanero peppers.
The key to these great mini habanero meatloaves is the onion, celery and bell pepper mixture. You cannot rush making sure you get all the liquid out of the vegetables after they have been blended. Your efforts will be well rewarded with a fantastic tasting meatloaf that you’ll want to make again and again. 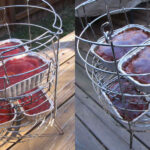 You’ll need a Big Easy Bunk Bed basket if cooking all 4 pans at once, otherwise you can only cook two at a time. For the pans, I used disposable mini loaf pans, which measure 6.1″ long x 3.8″ wide, and are 2″ tall.