Even though I’m not the world’s biggest fan of horseradish, it is completely impossible for me to eat too much of my mom’s shrimp dip. It’s certainly one of the easiest appetizer recipes you’ll ever come across. And also most definitely one of the best. It’s almost reminiscent of shrimp cocktail, which not surprisingly is also one of my favorites.

I strongly recommend that you at least double this recipe. It won’t last, even if you don’t have a big crowd to entertain. It won’t last.

I like a little texture to the shrimp, I want to know they’re in mom’s shrimp dip, so I don’t go crazy shredding or chopping them too much.

Even though the recipe starts with four teaspoons of horseradish, I always end up adding more. I will caution you that the flavor becomes stronger the longer it sits in the fridge, so for your first batch I’d start with what the recipe calls for. 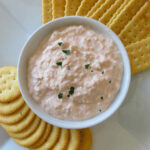 Even though I’m not the world’s biggest fan of horseradish, it is completely impossible for me to eat too much of my mom’s shrimp dip
Course Appetizer
Cuisine American
Keyword dip, shrimp
Prep Time 30 minutes
Total Time 30 minutes
Servings 1 cup
Calories 1339kcal
Author Mike

To shred the shrimp, use the end of a fork. It’s a bit tedious but worth it. You can chop them instead if you’re in a hurry, just don’t over-chop them.