If I’d had any idea just how fantastic these sloppy Cuban sandwiches would be I would’ve been making them for years. Every week. I would say every day, but that wouldn’t leave me much time for grilling burgers and such. The meat mixture is just incredible.

These sloppy Cuban sandwiches are as messy as they are supposed to be. You pick one up and you never set it down until it’s all gone. They’re called sloppy for a reason.

The meat has a bit of kick, but not much, and it’s offset by the cool crunchiness from the pickles. These may well be the perfect sandwiches.

I also make another great take on a sloppy Joe that uses chorizo called, well, a Chorizo Sloppy Joe. Also check out the Big Daddy’s Sloppy Joe for something a bit more traditional but with more grownup flavors. 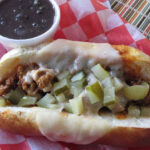 If I’d had any idea just how fantastic these sloppy Cuban sandwiches would be I would’ve been making them for years.
Course Main
Cuisine American
Keyword Cuban, sandwich, sloppy Joes
Prep Time 15 minutes
Cook Time 15 minutes
Total Time 30 minutes
Servings 6
Calories 510kcal
Author Based on a recipe from Rachael Ray