My goodness, me, there went my self-control again. Good thing I made two big batches of these smoked pecans because a lot of them were sacrificed in the name of ‘quality control’. The nuts are smoked just enough. There is a such thing as too much smoke on nuts. You don’t want it to be overwhelming, but you do want to still taste smoke. Otherwise, you can’t call them smoked pecans!

I used two different spice mixtures for the smoked pecans. The first batch I made a somewhat sweet, southwestern-inspired mix. It was a great balance of flavors, and one enjoyed by everyone. The second version I went a bit spicier (but not too spicy) route. It’s the same as the first mix, but with cayenne instead of cinnamon. People often shy away when they see ‘spicy’, but I found them to have just a hint of a kick and a little sweetness.

If you just finished smoking ribs, pork, whatever, on your smoker and still have some fire, smoked pecans are a great way to use up the rest of that smoke time. Never waste it, I say! 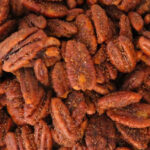 For a spicy version, substitute cayenne pepper for the cinnamon.