Spiral-cut hams from the grocery store are already cooked, and often smoked. That doesn’t mean that they can’t get even more awesome with a little more time on a smoker. A sweet glaze doesn’t hurt either. The end result is a lightly smoky flavored ham with a deliciously sweet crust. Like this smoked and glazed spiral-sliced ham that disappeared in no time.

This smoked and glazed spiral-sliced ham was perfect for sandwiches, salads, and just eaten as-is.

If you want to kick up your ham with a coffee-infused gravy, check out my red- and black-eyed gravies. My pepper onion beer sauce makes for a great topping for ham! 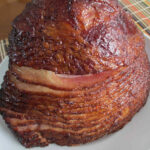 For the basting sauce