This was my first time ever making potstickers. Anita agrees – they were fantastic! No, they’re not authentic. I didn’t make my own dough. I cheated and used wonton wrappers instead. They were an excellent first attempt at making wonton potstickers, and we’d make them the same way again the next time!

If you  like a little kick in your wonton potstickers, add a little dried pepper flake to the meat mixture before wrapping them. They also add a nice kick to the dipping sauce.

Also try my herbed wonton crisps. They make for a delicious snack. For something with more of a kick, try my creamy Cajun sausage ravioli. 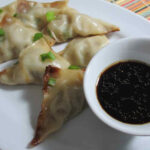