I recently made a yummy pot roast sandwich. As soon as we finished off all of the pot roast I was already jonesin’ for more. Instead of making the same thing again, I made French dip sandwiches, also adding a creamy horseradish sauce and caramelized onions. The result was over-the-top good. Super tender meat with great beefy flavor, wonderful onions, and a horseradish kick to boot.

I used to make more ‘normal’ French dip sandwiches. You know, thin sliced beef with an au jus for dipping. Good stuff. But now I’m addicted to shredded beef dip sandwiches with a wonderful horseradish sauce and caramelized onions. I got the inspiration from my pot roast sandwich, which is actually my take on the same sandwich from the Hobnob Corner Restaurant in Nashville, Indiana. 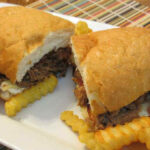