Who doesn’t love a bologna sandwich? Well, this takes the old classic to a whole new level. You’ll find it hard to believe that you’re eating bologna. Crispy, fried sandwich meat with spicy BBQ sauce served on a bun with creamy tangy slaw. You need fried BBQ bologna sandwiches right now! And actually, I do too!

These fried BBQ bologna sandwiches are so good that we made them twice this week already. Although I grew up eating my share of bologna sandwiches (on white bread with mayo), I never had fried bologna until I moved to the midwest. Dang, all those years missing out on such awesomeness! 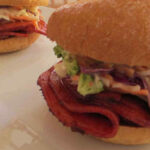