Anita and I stopped by Pappadeaux Seafood Kitchen outside of Cincinnati, Ohio, the other day. The food there is always absolutely amazing. We had their Coconut Shrimp with Cajun slaw and a dipping sauce, and it was beyond fantastic. Ever since then I have been jonesin’ for coconut shrimp. Now, this recipe for coconut fried shrimp is not meant to be a copycat of the version from Pappadeaux. But, it’s still mighty tasty and comes with a great dipping sauce (don’t be afraid to double the recipe for the dipping sauce).

Be careful to not overcook the shrimp when you’re making these coconut fried shrimp with dipping sauce. They don’t take long to cook at all, just until they are just starting to turn golden brown. 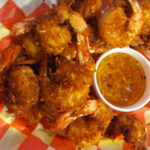