I’m not sure when this idea hit me. I was probably sleeping, dreaming away… In my dream I dreamed of buffalo wings. A big batch of tasty, hot buffalo wings. And then, I started dreaming of ABTs (bacon-wrapped stuffed jalapenos)… tasty, cheesy… with just a little heat. Then POW! I woke up and thought Buffalo ABTs (also known as atomic buffalo turds)!

So I made them.

And they were really, really good. So good that I made Buffalo ABTs several times in one week. Jalapenos lose a lot of their heat when slow cooked for an hour or two. They still have a little bite, but are more like a poblano than a hot pepper.

The stuffing for the Buffalo ABTs is fantastic, and also makes for a great dip for celery or chips. You can also chop up the entire ABT (jalapeno and all) and use in a grilled cheese sandwich. 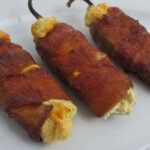