I’ve made a few variations on hobo packets. They’re easy to make, tasty, and make for easy cleanup. This BBQ hobo packets version uses BBQ sauce and has quickly become one of my favorites. Cheesy goodness, with potatoes and onion, all cooked with sausage in a BBQ sauce. All of the ingredients get all steamy happy inside the packet while they cook and the flavors melds perfectly.

I made these BBQ hobo packets a few times for the crew that was remodeling our kitchen. They liked them with sausage or chicken, but I think they favored the chicken one the most! 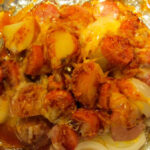