When I moved to the mid-west from the east coast I heard about this thing called ‘Cincinnati chili’. My reaction to the idea of spaghetti and chili was one of shock. Cinnamon? What? Is that an accident? That was all before I tried it. I’ve learned to be less judgmental about new foods since then, and Cincinnati chili is one reason why. I love it. It’s perfect, and not just on cold mid-west winter days either.

Making Cincinnati chili in a slow cooker is easy and tasty and I’d make it again and again. Now, if I happen to be in Cincinnati, I’m heading to The Chili Hut, my hands-down favorite food truck.

I’ve been lucky enough to have the chili from the Chili Hut several times, from the parking lot at Jungle Jim’s in Fairfield Ohio to the huge food truck rally in West Chester Ohio. You can have your chili as many ways as you want from the Chili Hut. The chili is perfectly seasoned and has the best texture. It’s beyond yummy! 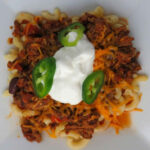