I’m a big fan of Hasselback potatoes. They’re like a cross between scalloped potatoes and baked potatoes. They look cool and are actually pretty easy to make. This time I took my classic favorite Hasselback potato recipe and threw in a twist: I baked the potatoes on my grill on a cedar plank. The plank added a wonderful aroma and flavor to the potatoes. Not too much, but just enough to make me say “Wow, that’s great and different!”.

Cutting a potato Hasselback-style is actually pretty easy. You can just put a wooden spoon along the potato and slice them manually. The spoon will stop you from going all the way through the potato. Or you can ‘cheat’ like I do and get a Hasselback potato slicer (see below). It holds the potato in place. It also makes sure that each cut is the same thickness. And of course, it prevents you from cutting the potato too far. Hey, who doesn’t need another kitchen gadget! 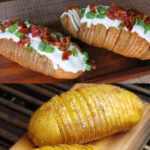