This isn’t my first time smoking a bologna chub (often called a log). But it is by far the best I’ve ever made. I used Albukirky Seasoning’s Red Chile BBQ rub (you can use any rub you want, but I highly recommend theirs) and it added a fantastic flavor (and a slight spiciness) to the bologna. 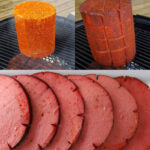