I love smoked spiral ham. I usually don’t need anything on it. Just give me some ham and I’ll be happy. But recently I started thinking… “Ya know, I’ve never made red-eye gravy before. I should do that.” So I did, and it was good. Very good. But then I thought, “I bet that Sriracha in red-eye gravy would be spectacular.” So I did that too, and it was beyond good. Known as black-eye gravy, it was my favorite of the two, but the competition was close. Red- and black-eyed gravies are a staple in this house.

Either one of these gravies would be great on a steak, too. Or over a sliced beef rib roast. Ooooh, I need to make that. Soon. I do love red- and black-eyed gravies for sure! 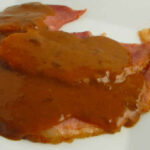 For the red-eye gravy

For the black-eye gravy