You’re at this post for a reason. Maybe, like me, you actually like Steak-Umms. Like many, I was first exposed to them in a school lunch cafeteria years and years ago. And like many kids of the time, I would go home and beg mom to get them so I could have a steak sandwich there too. Mom wasn’t too keen on them, but would buy them for me as a rare treat. I’d have them about as simple as you could get: fried the Steak-Ummm, put it on a bun or white bread with ketchup, eat. Well, now I step things up with my quick fix steak sandwich, made using the Cuisinart Griddler.

The Griddler makes making a steak sandwich about as easy as you can get. Having the two big cooking griddles lets you cook several things at once. Without it, I’d end up with a skillet for the Steak-Umms, another for the onions and peppers, and I’d probably fire up the oven or toaster just to toast my sub roll. Sheesh, that’s a lot of stuff when I can do it all on my Griddler.

The history of the Steak-Umm is actually rather interesting. You can read about it here.

You can also make outstandingly good smash burgers on the Griddler. 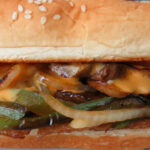