Anita told me to make this again before we were halfway thru the first batch. There’s nothing about it that’s not great. Beans in creamy Alfredo sauce, flavored with water chestnuts, mushrooms and pimentos (or in my case, roasted red bell peppers) and a little cheese. And yes, French fried onions and toasted pecans. This slow cooker green bean casserole screams holidays.

I made this early enough in the fall to get fresh green beans, which I blanched first. Frozen beans work just fine too. But, if you’re like me you’ll want extra French fried onions. No, they’re not for the dish. They’re for munching on while you watch everything cook in the slow cooker. 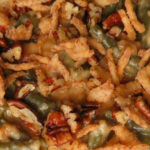