You had me at ‘okra’. I love okra. Grilled, fried, sauteed, roasted… or tossed into this Creole-style bean soup. The okra helps thicken up the broth and adds such a great flavor. All the flavors of a gumbo, along with some hearty beans to boot. Easy to make and fantastic on a cold day.

I don’t add the shrimp to the entire pot of soup if I’m not going to eat the entire batch at once. Reheated shrimp are not my favorite thing. They get too tough. Instead, I transfer some of the soup (just enough for dinner) to a separate pot and then add the shrimp. It’s a bit more trouble but I think it’s worth it. I could leave out the shrimp entirely and still have a great soup, but it wouldn’t be the same, that’s for sure. 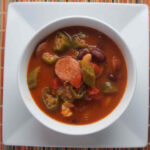