Anita got me hooked on thick-cut bologna burgers and sandwiches. They are like the grown-up versions of the bologna sandwiches I had as a kid. I get the deli to cut chub bologna 1/2″ thick and then either fry, grill, or smoke it. Then I slather the bologna with Ross’ Pool Room sauce and serve it on buns topped with onion and pimento cheese. Yeah, that’s a Southern bologna burger right there!

Any pimento cheese will work on these southern bologna burgers. I didn’t go crazy making one of my more complicated versions. Simple is just fine. For a bit of a kick substitute pepper jack cheese for the Colby or add a minced seeded jalapeno pepper. 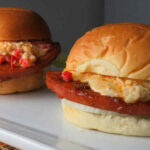 For the pimento cheese topping

For the pimento cheese topping